Our UK tour, and the first of our 25th anniversary year, begins on the 24th of February in Hawick! 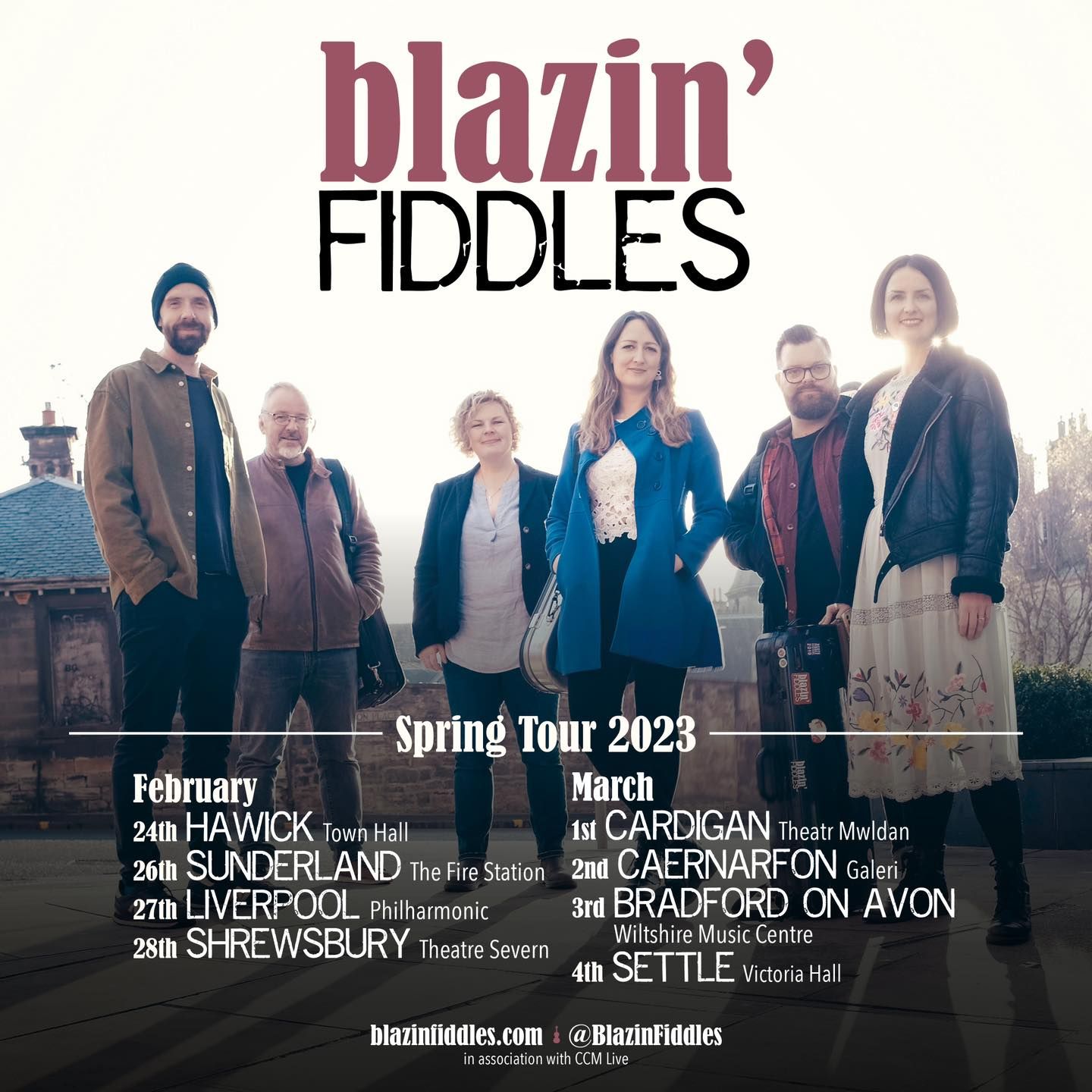 Following the huge success of 2022’s inaugural St Andrew’s Day celebration gig, Blazin’ Fiddles are back for another party!

Scotland’s most celebrated fiddle band will join together with special guests for a St Andrew’s night celebration. Blazin’ Fiddles dynamic live show draws together the distinct musical flavours of the Highlands and Islands.  Blending solo and ensemble sets, they come together in a fiery blend to excite your senses.  From remote village halls to the BBC Proms at the Royal Albert Hall, the power house fiddle quartet of Bruce MacGregor, Rua Macmillan, Jenna Reid and Kristan Harvey are joined by the formidable Anna Massie on guitar/fiddle and Angus Lyon on piano to deliver a musically intoxicating evening.

Tickets are available at an early bird ending on December 29th 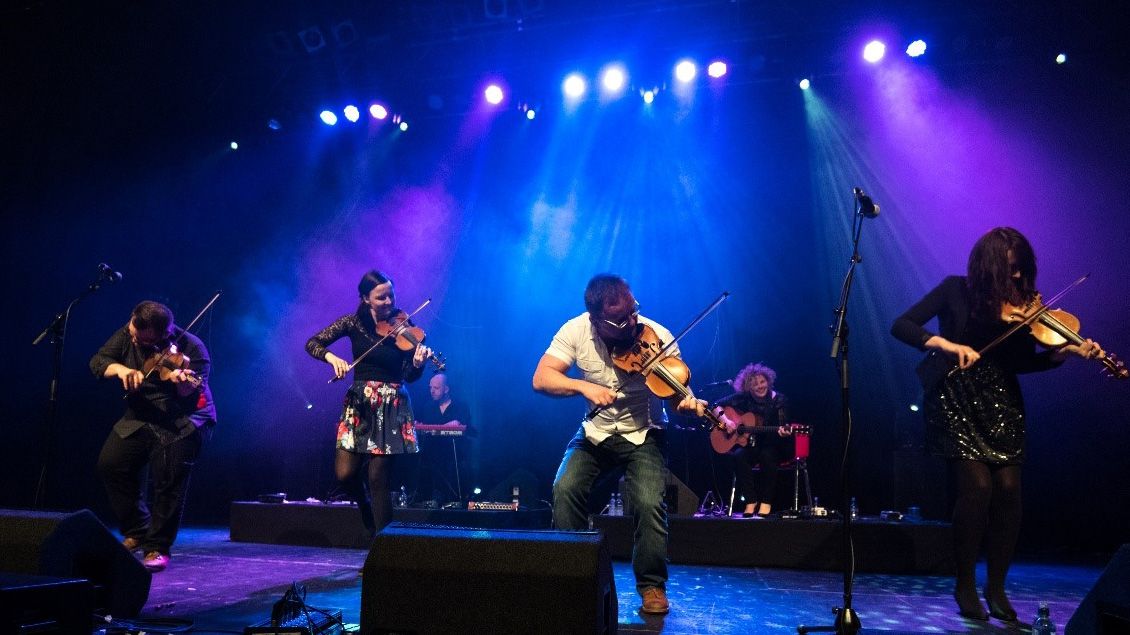 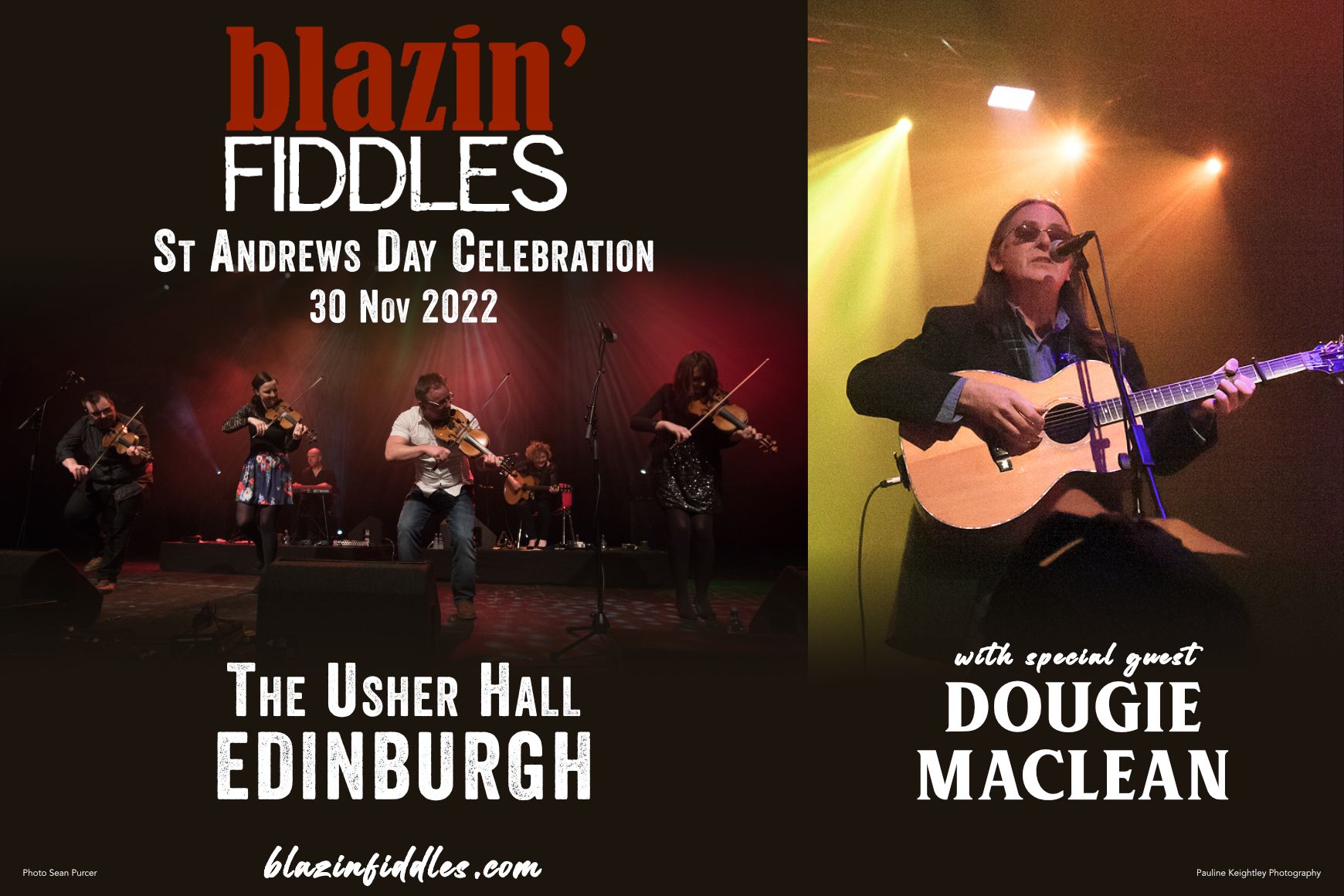 Scotland’s most celebrated fiddle band Blazin’ Fiddles will join together with Dougie Maclean for a St Andrew’s night celebration.

Blazin’ Fiddles' dynamic live show draws together the distinct musical flavours of the Highlands and Islands.  Blending solo and ensemble sets, they come together in a fiery blend to excite your senses.  From remote village halls to the BBC Proms at the Royal Albert Hall, the power house fiddle quartet of Bruce MacGregor, Rua Macmillan, Jenna Reid and Kristan Harvey, are joined by the formidable Anna Massie on guitar/fiddle and Angus Lyon on piano, to deliver a musically intoxicating evening.

Bruce MacGregor, founder of Blazin’ Fiddles, said: “I still pinch myself that we’re at 24 years! It was only meant to last for four concerts back in 1998 but here we are 24 years later still going strong. I can’t wait to have Dougie Maclean guesting with us on this special concert.
“When the band started in 1998 it was born out of a desire to showcase the Scottish fiddle, in all its guises. We drew on influences from all of the fiddle playing regions of Scotland and put these together in one band; this is why for us, in our 24th year, it is so important to tour Scotland and bring our music to as many areas of the country as we can. We hope to see you there!”

“Dougie MacLean is Scotland's pre-eminent singer-songwriter and a national musical treasure” (SingOut USA) who has developed a unique blend of lyrical, 'roots based' songwriting and instrumental composition. He is internationally renowned for his song 'Caledonia', music for 'Last of the Mohicans' and inspired performances.His songs have been covered by Paolo Nutini, Amy MacDonald, Ronan Keating, Mary Black, Frankie Miller, Cara Dillon, Kathy Mattea and many other top performers. He has received two prestigious Tartan Clef Awards, a place in the Scottish Music Hall of Fame, a Lifetime Achievement Award from BBC Radio 2 Folk Awards and an OBE!

Following the success of our Doddie’s Dream fundraising single last year, we’ve decided to take our fundraising up a level, and out of our comfort zones.

In a fit of confidence and motivation, 4 of Blazin’ Fiddles have signed up for the Great Scottish Run. We’ll be taking to the streets of Glasgow on Sunday the 2nd of October, running in aid of the My Name5 Doddie Foundation, to support their research into Motor Neurone Disease.

We had our first training run at the Orkney Folk Festival in May, and are looking forward to the main event in the autumn. You never know - inspiration may strike on the Squinty Bridge or along the Broomielaw!

If you'd like to donate to a brilliant cause you can head over to our Justgiving page.

Fair to say we’re sad to be leaving Finland today! The past week has been an amazing experience and we’ve enjoyed every minute of our time here, and in Norway. We’re off home now with lovely memories, and more mosquito bites than we can handle… by about 100%. 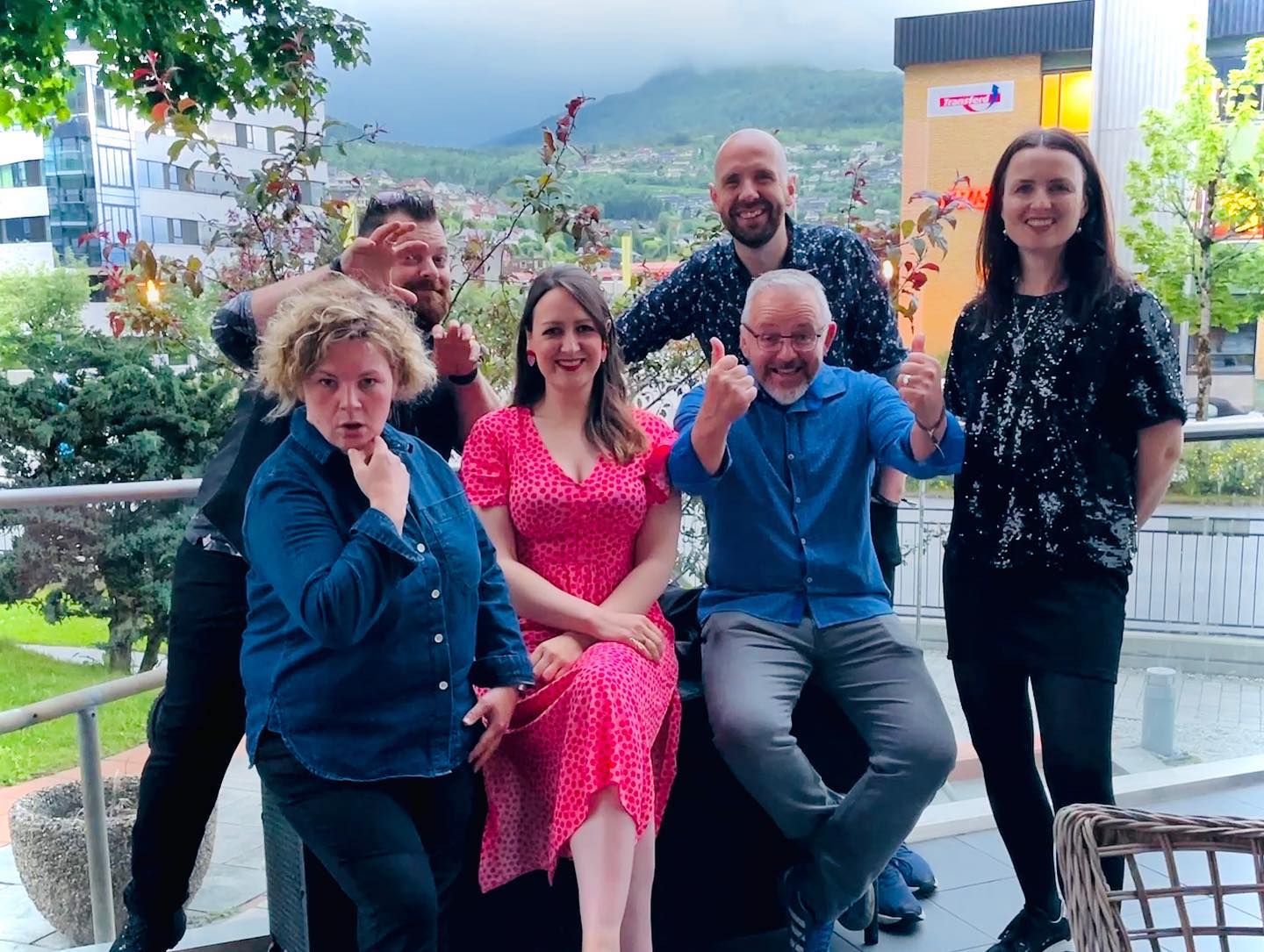 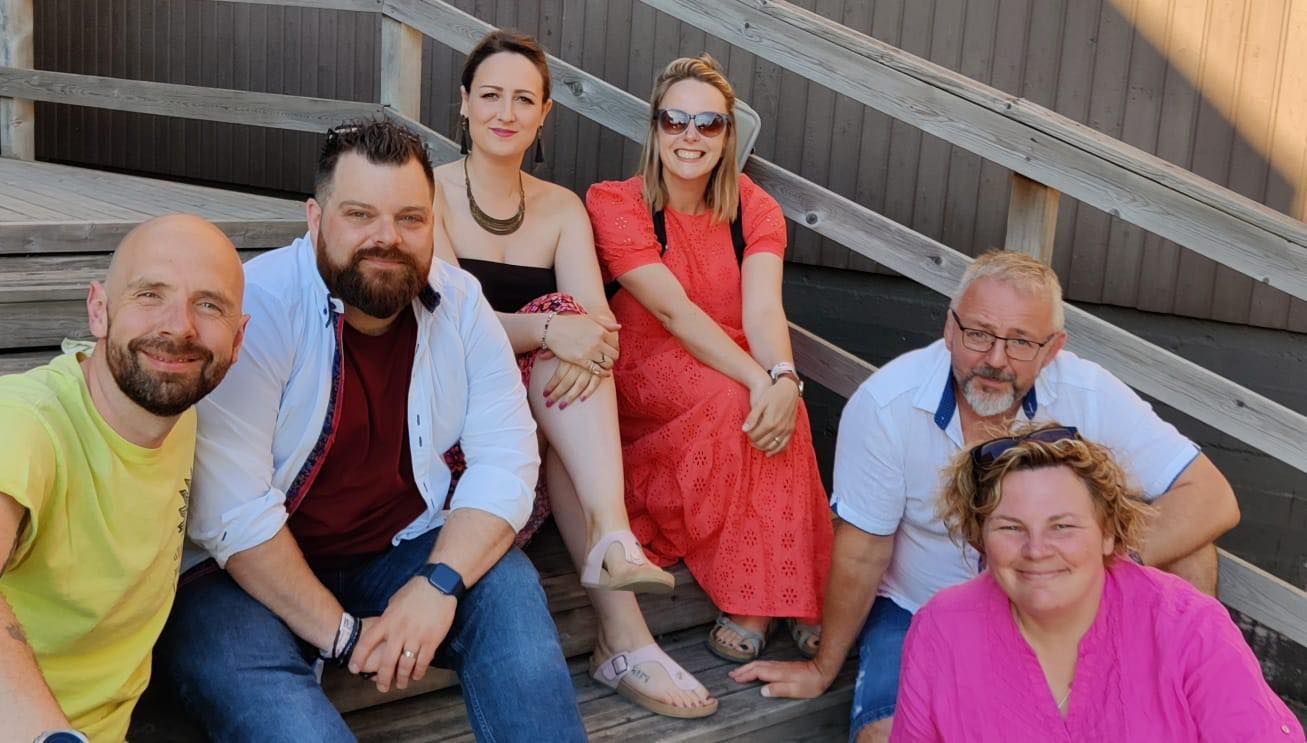 6 weeks today we’ll be taking to the stage to kick off our summer tour with sublime vocalist, Hannah Rarity!

Along the way, we visit -

Get your tickets before they disappear at our gigs page

See you there!
BF 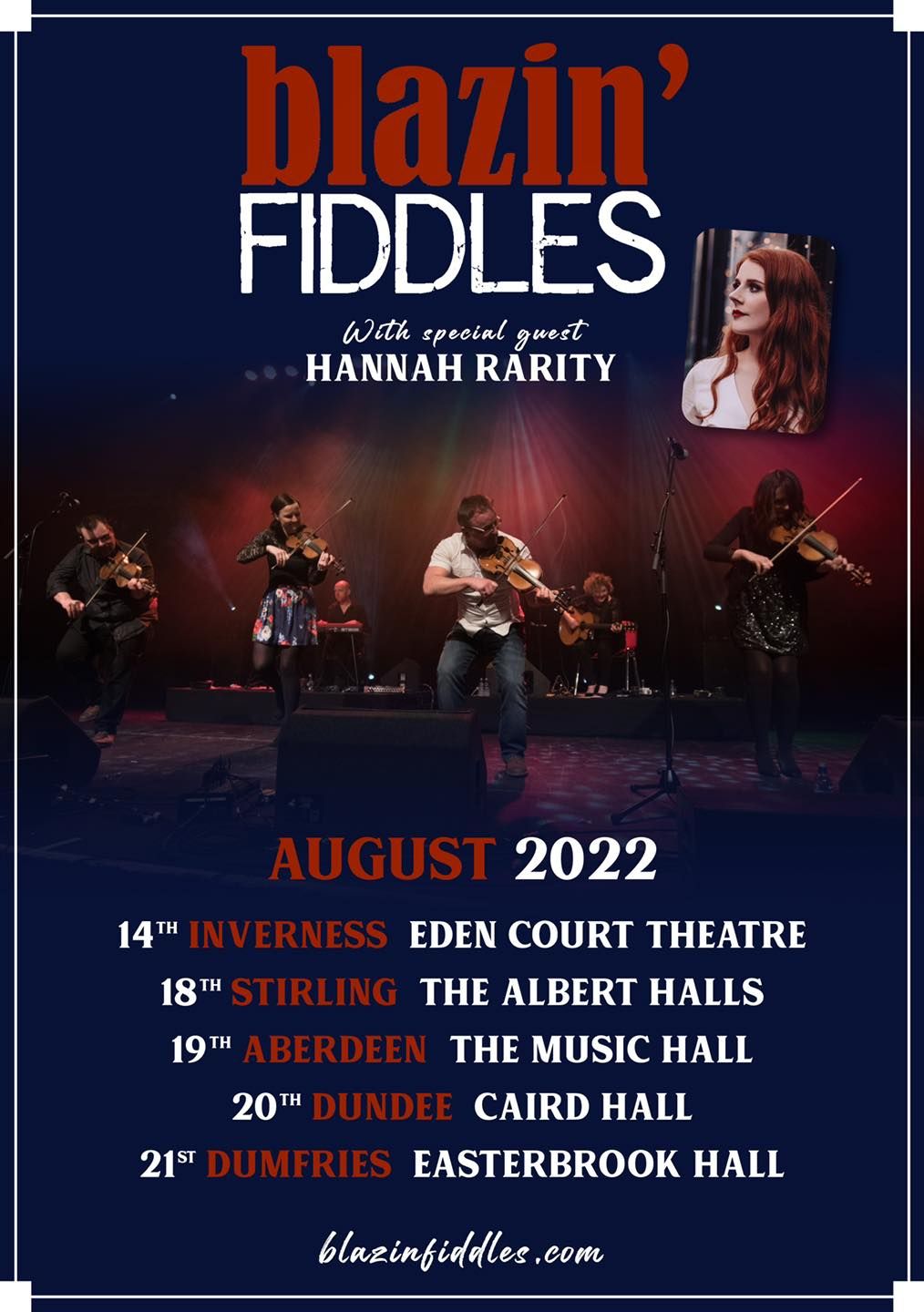 We’re so, so blown away by the response to the first ever Blazin’ in Biggar. Thank you so much to every single person who came along, helped us out, supported the event and made it an unforgettable weekend.

Here’s to the next one!! 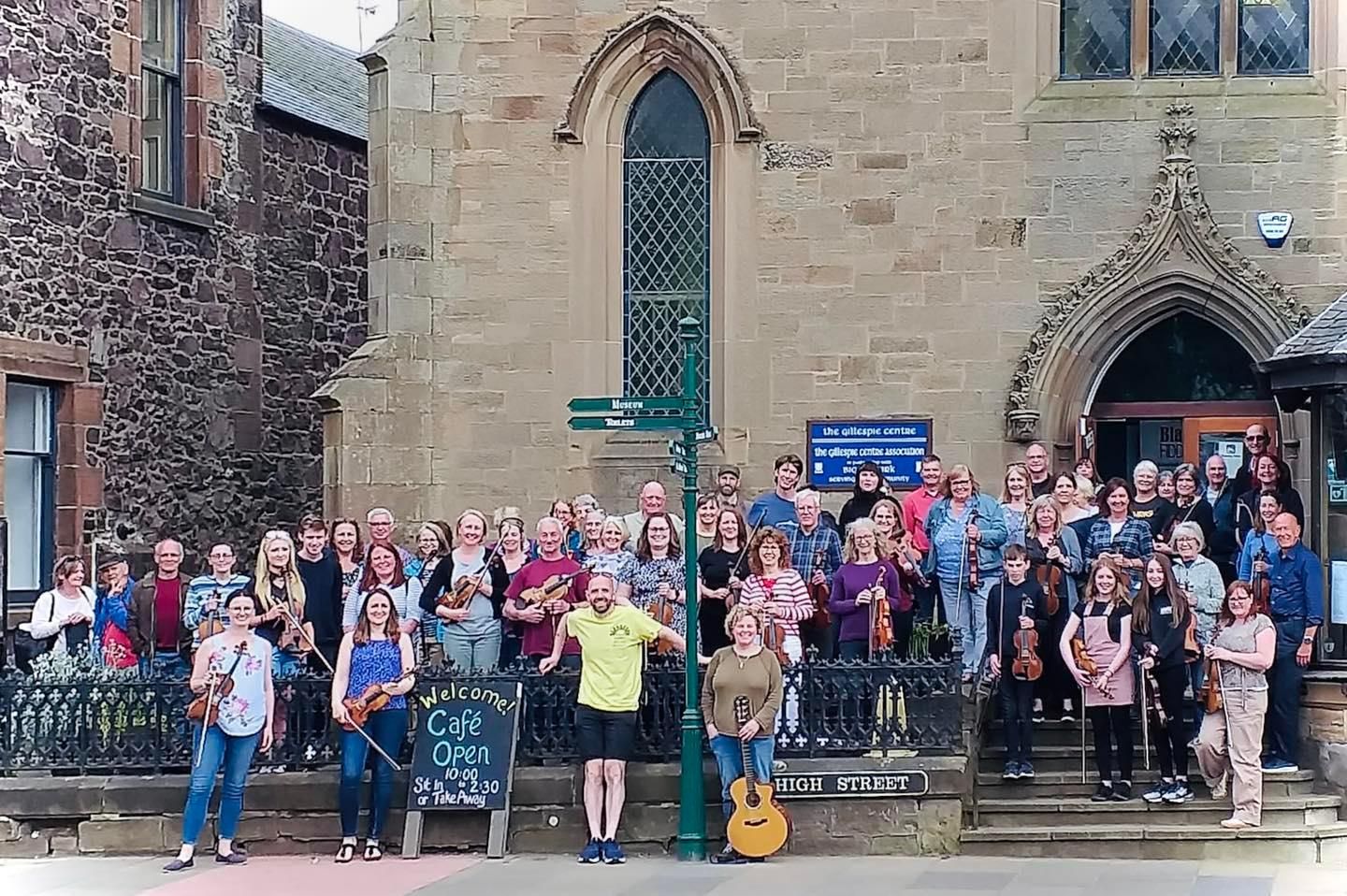 Blazin' in Beauly dates announced for 2022!!

Tickets on sale ONE WEEK TODAY at blazininbeauly.com 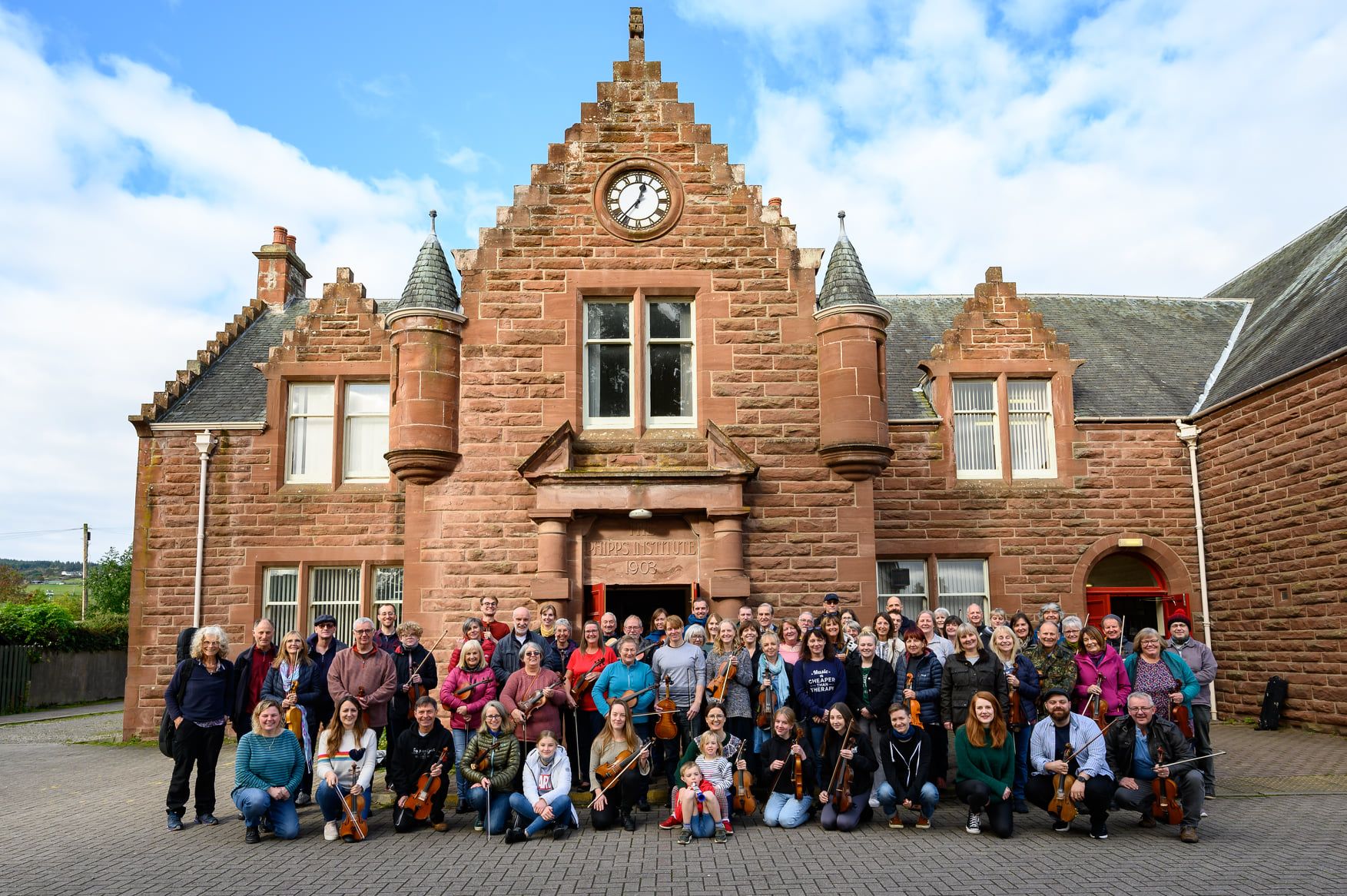 Well folks, that’s the tour over. Hire vans are returned, bags unpacked and bows booked in for rehairs…

It felt very special indeed to be reunited and back out on the road to play for real live audiences. The atmosphere at each gig was truly magic: we’ve been moved by the welcome we received from crowds and venue staff alike. Music, it seems, really is healing.

We’ve got things to tell you about upcoming tours and teaching events, but for now it’s just a big THANK YOU!

(Extra credit to Angus for having the wingspan to take a selfie with 7 folk in!) 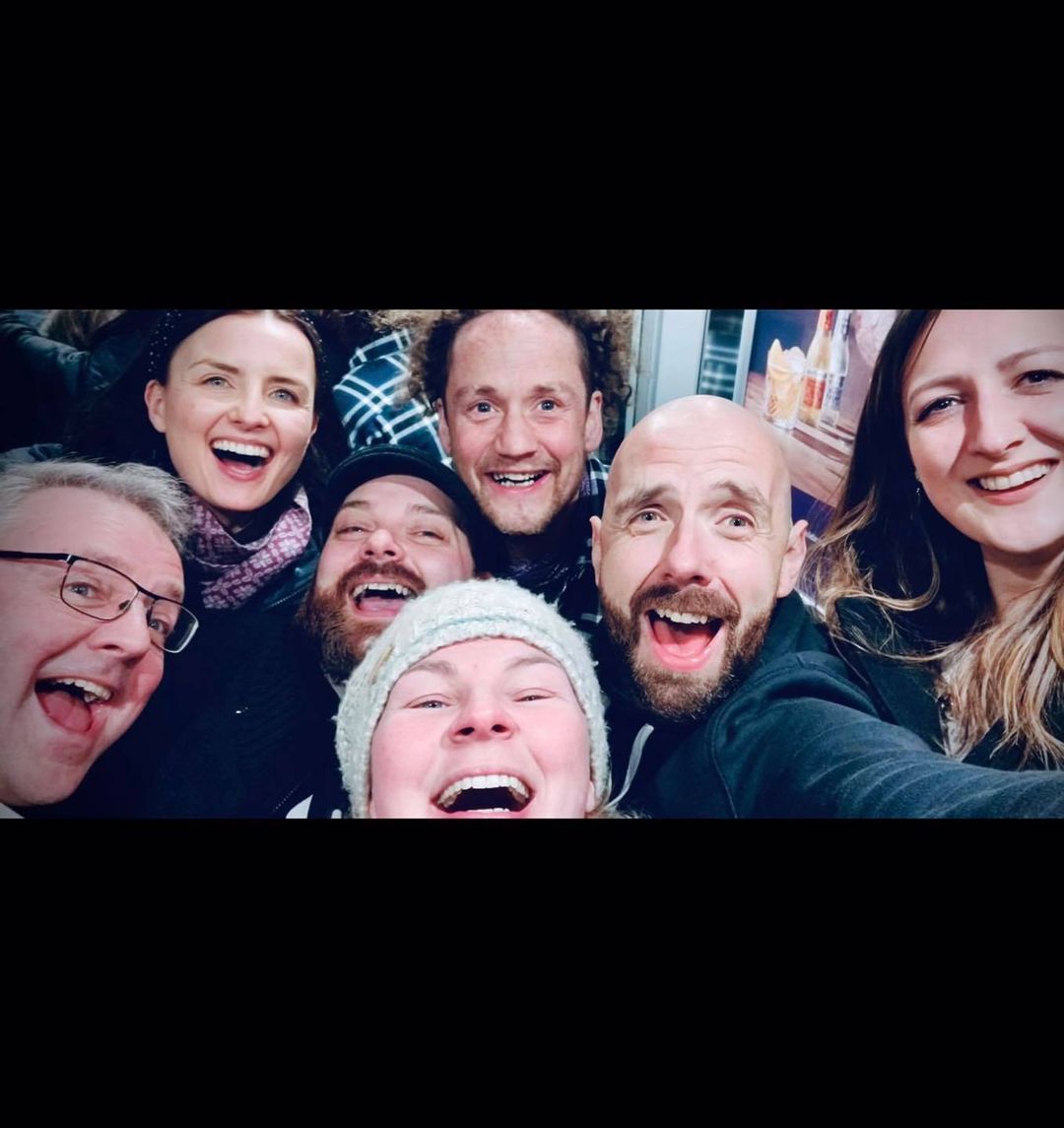 Oh boy, it feels great to be back on the road! Lots of favourite venues on the poster and some old favourites on the set list too. Smashin! 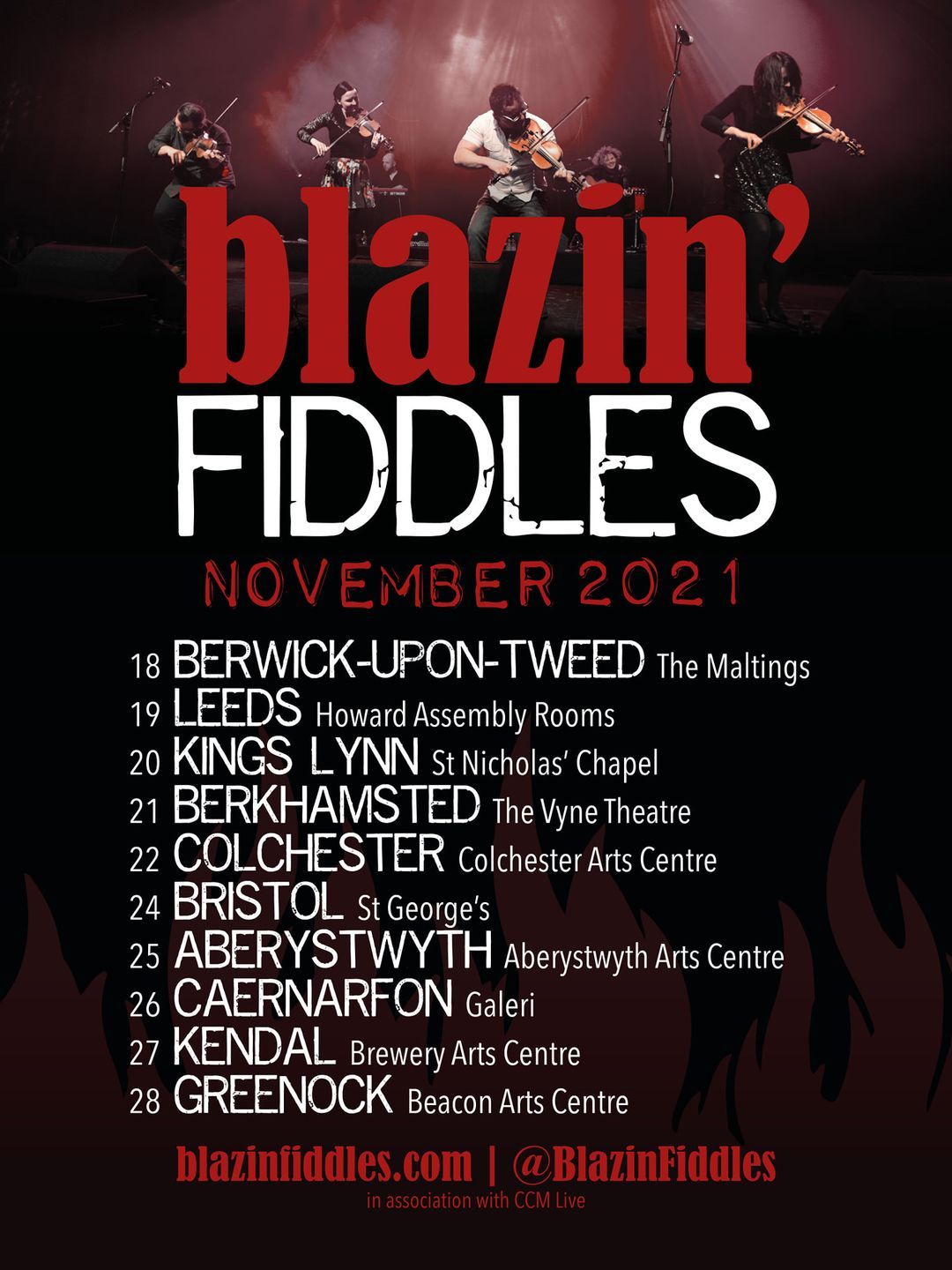